Its been a week or so since our last post when we were leaving Nam and heading into Laos.. And what a faaabuloso week its been…

Think we have finally settled into the ‘backpacking’ … Ok ok flashpacking lifestyle… More of the self-guided tours, jumping off random things, wandering the streets, eating from the market and being inspired by the gazillions of serial travellers.. 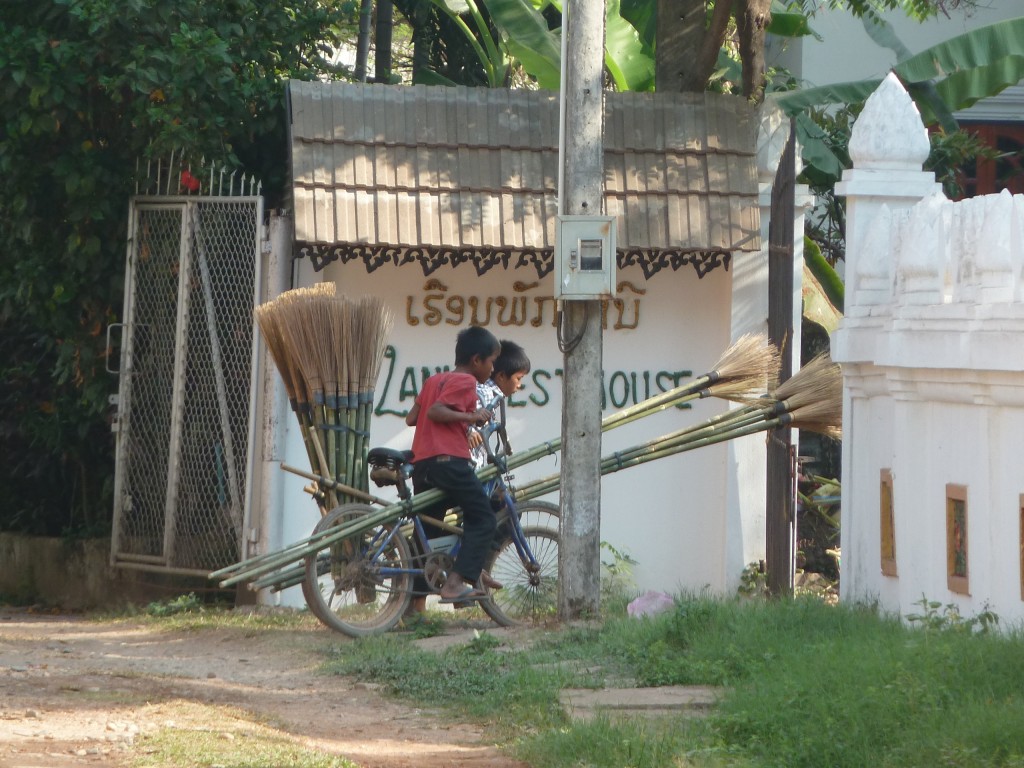 Having nearly been a month of travelling, I think it has just hit us that we aren’t going home for a while yet and it ROcKs!!

As soon as we arrived in Vientianne, the capital of Laos, we couldn’t help but feel the need to chiiiiillll right out… After about 3 hours in Laos we could already see why people rave on about it… Totally loved the vibe of the place. Despite Vientianne receiving very mixed reviews, the friendliness of the people and the lazy sunday morning feel of the city gave us a great warm up to the culture of Laos. As I said to Rishi at the time, if this is the less liked part of Laos, I can’t wait to get to the loved parts! 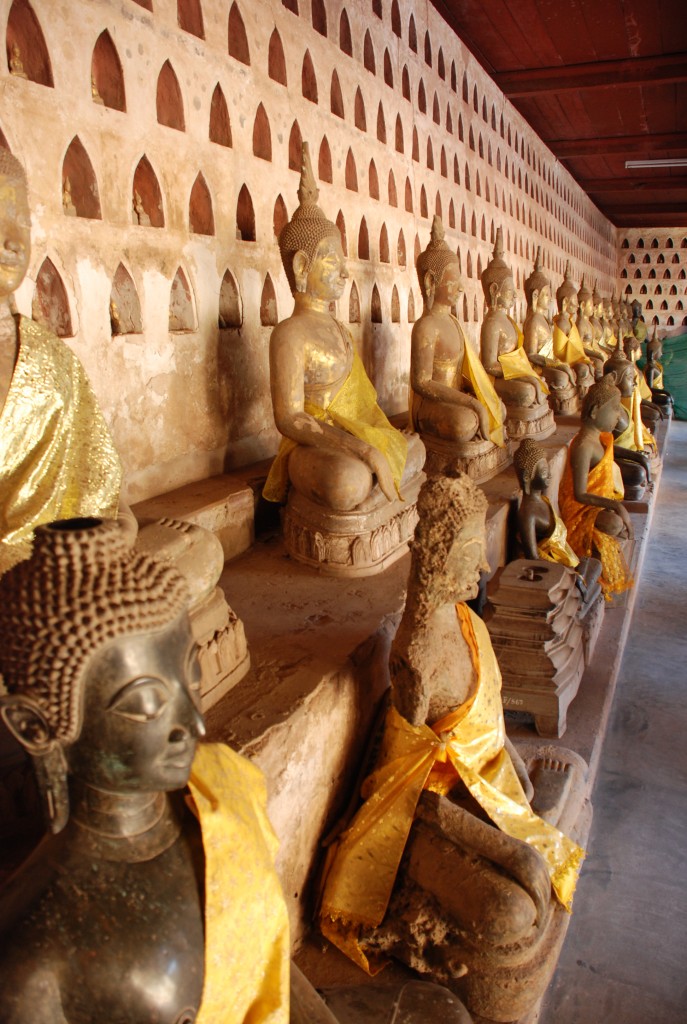 Overall the main highlight of Vientianne for us was the Bhudda park.. Which has loads of statues of Bhudda and even Hindu Gods including a gorgeous statute of Krishna, but it’s 25km out of town…easy to get to for 50p on the local bus! Don’t take a tuk tuk there..

Our other most favourite place was a little cafe called Fruit Heaven which began our addiction, and I mean addiction to yuuummy fruit shakes…hmm, my mouth is watering thinking about them… You get a fruit shake for less than a dollar in Laos… it’s not whether you should have one, it becomes a question of what fruit to have this time!

To give an idea of what Laos is like, the best story I can recall is in this little cafe where one of the staff got an order wrong and they had a little telling off, but all the while they were smiling and said it so jovially that it seemed more like friends just chatting… SOoo relaxed.. Something I could definitely learn from!! I know Rishi agrees…

We moved on to Vang Vieng pretty soon after, having heard that its an absolutely gorgeous place which has been trampled by 18 year old chavs who are constantly stoned and drunk… Sweeet!… Ok to be fair I was a little apprehensive, hmm, that’s sooo unusal for me, no?!…

Anywho, after our bus ride, aka a minivan which was made for little Laos people, I.e. No space… we immediately found ourselves a little guesthouse, dumped our bags and went exploring. VV is a super duper party and chill out place. 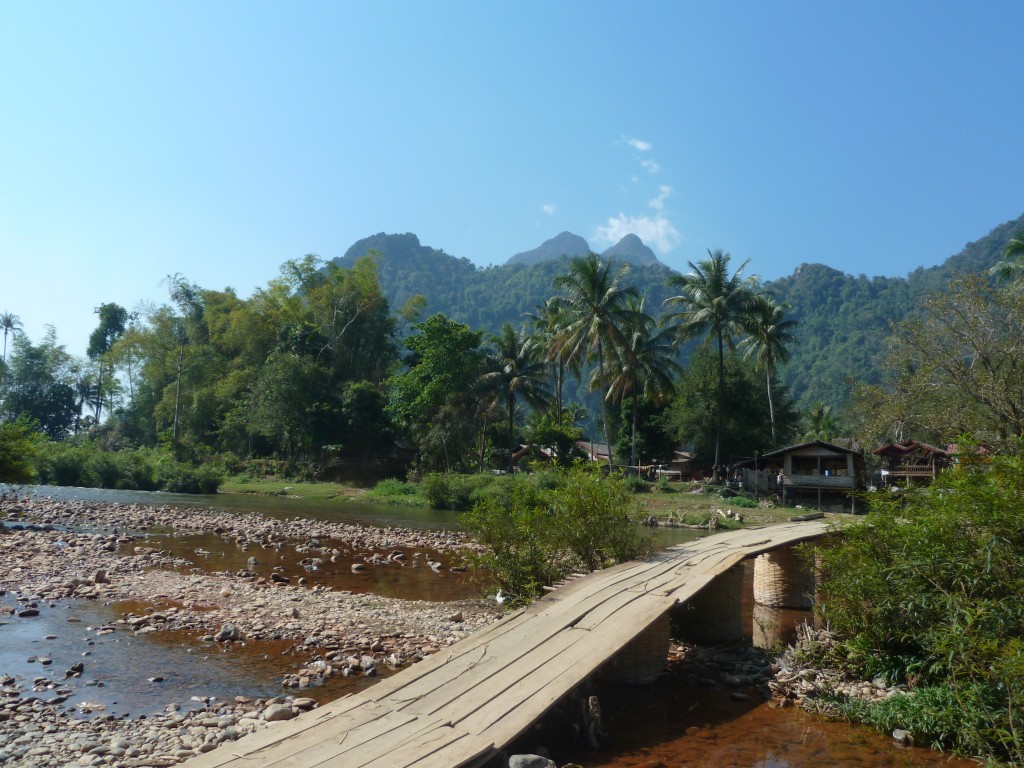 We tried to pack in as much as we could in our time there… Caving was loads of fun, especially the water cave where you sit on a tube and drag yourself further and further in… Being chased by several dogs while trekking through local villages was undoubtedly another one of the highlights too, especially when even our tour guide was suggesting we make a run for it and had to warn the dogs of with sticks… Really inspires a lot of confidence! Lol…

But the ultimate part of VV has to be tubing… We sat on tubes about 5km up the river from VV and floated down past loads of bars, pumping out party music, who throw you a rope and drag you in when you want to stop… At the bars you can go nuts by ziplining, sliding or just diving headfirst into the river… Be careful when it’s low tide though, sooo many people were on crutches or had got other injuries! Eek!… We somehow managed to get a chaperone who followed us on a kayak and pushed our tube along till we got to his bar… As anyone who’s been here knows, first thing you gotta do when you stop is knock back some Lao Lao… A shot of whisky… Hmmm, tasty… And obviously I had to wash that down with something a bit sweeter so we ordered a vodka lemonade… 5 bucks for a bucket of the stuff and it tasted really good too…! This has to be the ultimate party/adventure destination in SE Asia! 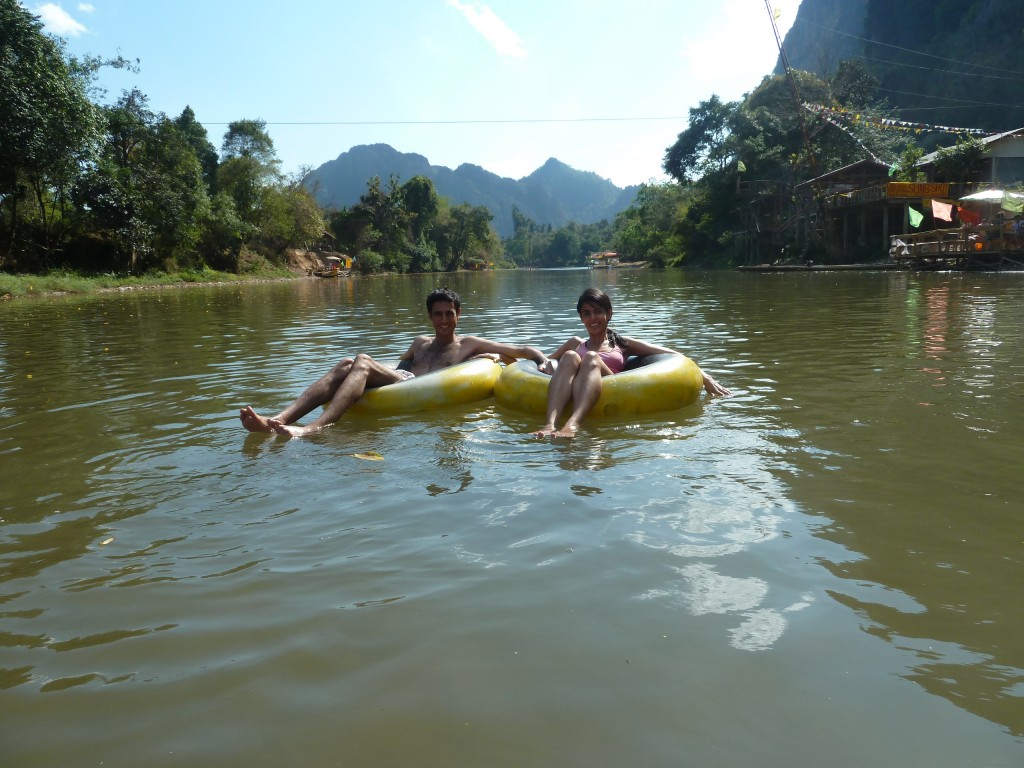 Even if you don’t drink or you aren’t 18… Tubing alone is a super cool experience. The scenery is absolutely awesome as you float down, and the people aren’t all chavs…it’s all totally up to you how good you make your trip while you’re there!

After a tiring, strenuous day rolling down the river… Don’t scoff.. It’s hard work flapping yourself down that river!! Lol… You are bound to be hungry… Starving!! We enjoyed our cheap as chips food sitting on raised ‘floor’ like seating while watching god knows how many episodes of Family Guy… I cannot understand why people put Vang Vieng down… This day has to be one of our most favourite in the trip so far! BIG THUMBS UP VV!!! 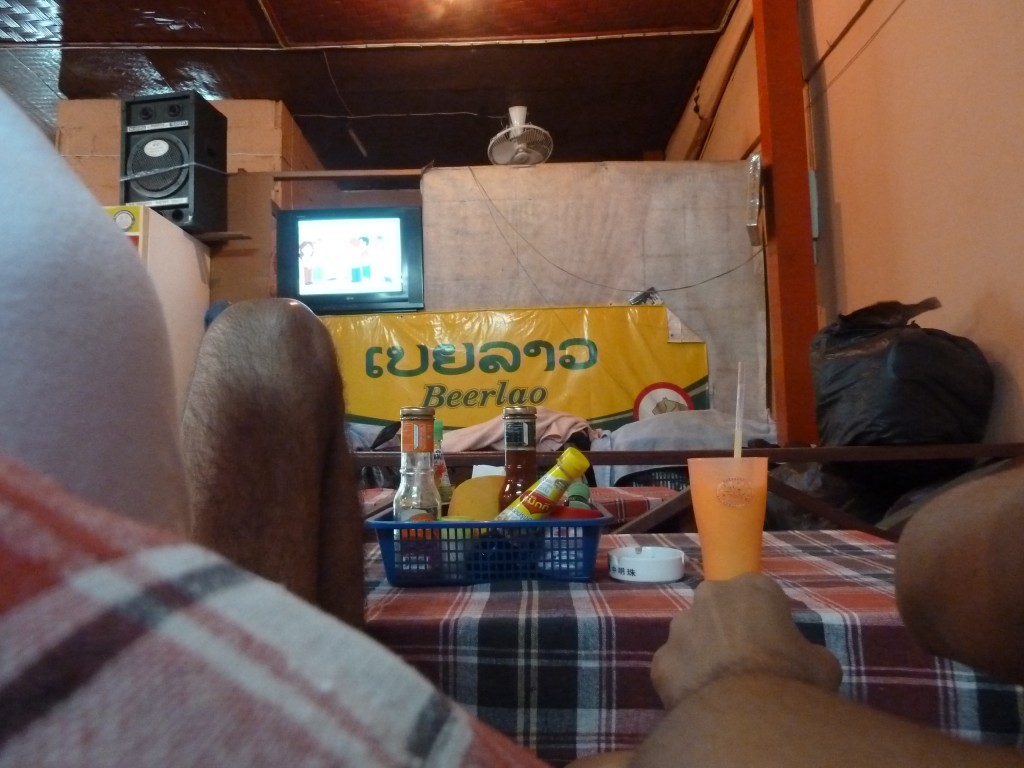 Sadly, we had to move on, but that’s the amazing part of travelling… End of one fantastic place, means moving onto another.. And meeting even more new people!

Off to Luang Prabang, which is sooo beautiful.. It has the Mekong River on one side, the Nam Song on the other..and plenty of temples in between… 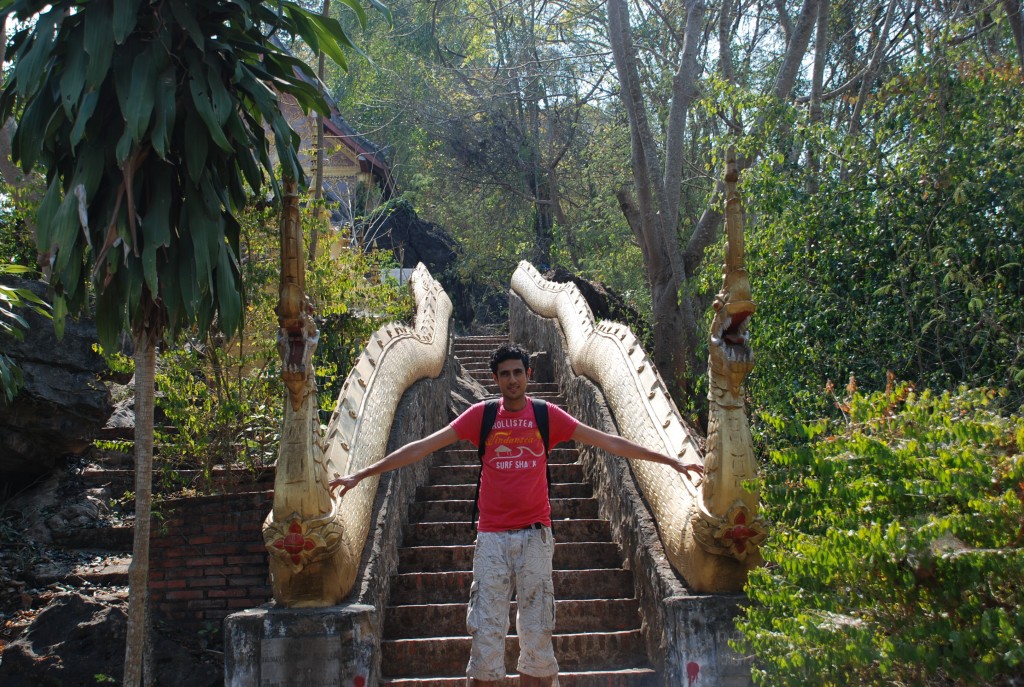 Rishi will I’m sure go on and on about the new obsession I developed with photographing monks…Seriously they totally make the photo so much more exciting.. And then I discovered the kid monks.. Cute AND fantastic colouring for pictures..!! It was a 2 for 1 I couldn’t resist.

Despite, Rishi having teased me on my monk obsession… He made us stand around one of the temples while the monks were getting showered up and dressed… Before they came down for chanting (amazing vibe) and prayers inside the main temple… It was worth waiting for though. The monks found us as intriguing as we did them.. Seeing an Indian is apparently a exciting sight! Talking to them in broken English/ sign language we got an insight into their lives as monks.. They are just normal boys wanting to get an education and because many families can’t afford it, the boys become monks.. They won’t necessarily remain as monks forever.. But while they commit to this life, they commit to 4am prayers, only two meals a day, shaving their heads monthly, living on alms from the local people…and a devotion to Bhuddism. Pretty full on.. 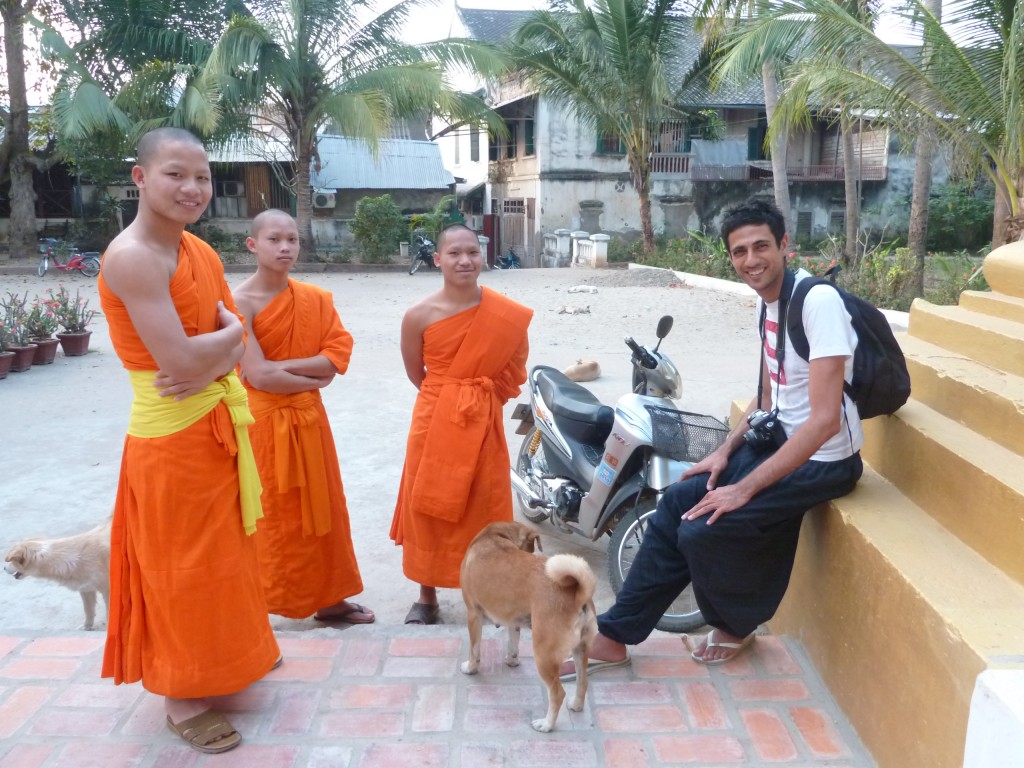 If you do go to Luang Prabang, get up at early to watch (6am) the procession of 200 monks through the city as they collect alms from the local people… Ok its probably more tourists now, but the sight is fantastic and something you are unlikely to see elsewhere… It took us 3 mornings and several snooze buttons before we did it.. but we got there in the end… 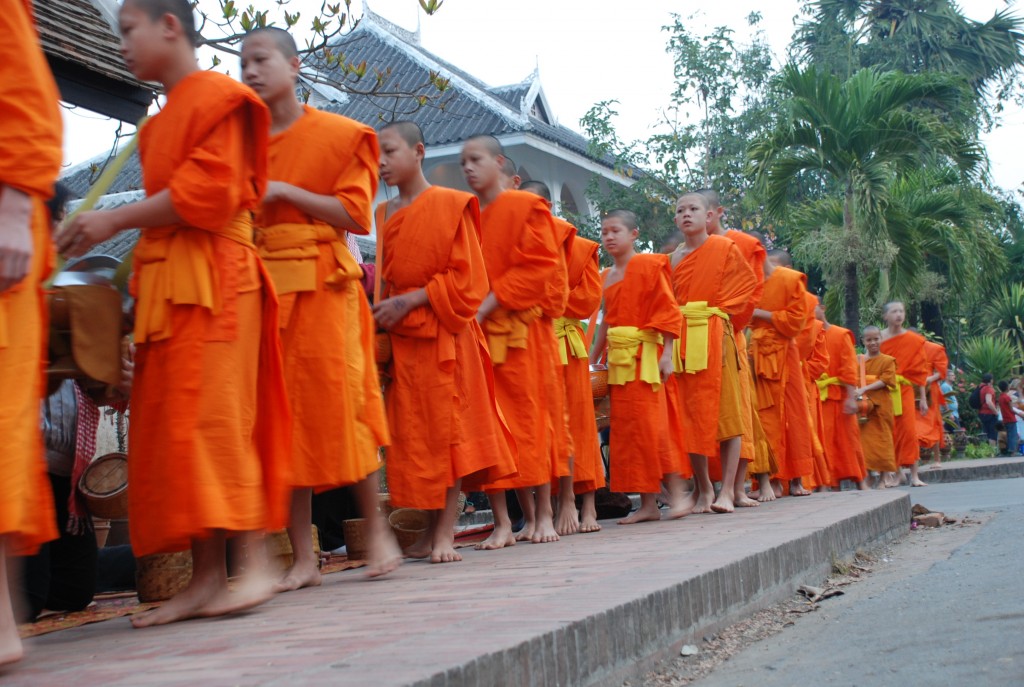 There are not sooo many activities in LP… But you will know the most popular thing to do here as soon as you arrive because you’ll hear the ringing in your ears from the tuk tuk drivers… “Waterfall today… Cheap cheap”.. Of our 4 days here, we did go to the waterfall once with a French/Finnish couple and a couple of girls from Dorset.. I’m particularly proud of myself. After going on an trekking adventure to the top of the falls and sliding down the otherside!! 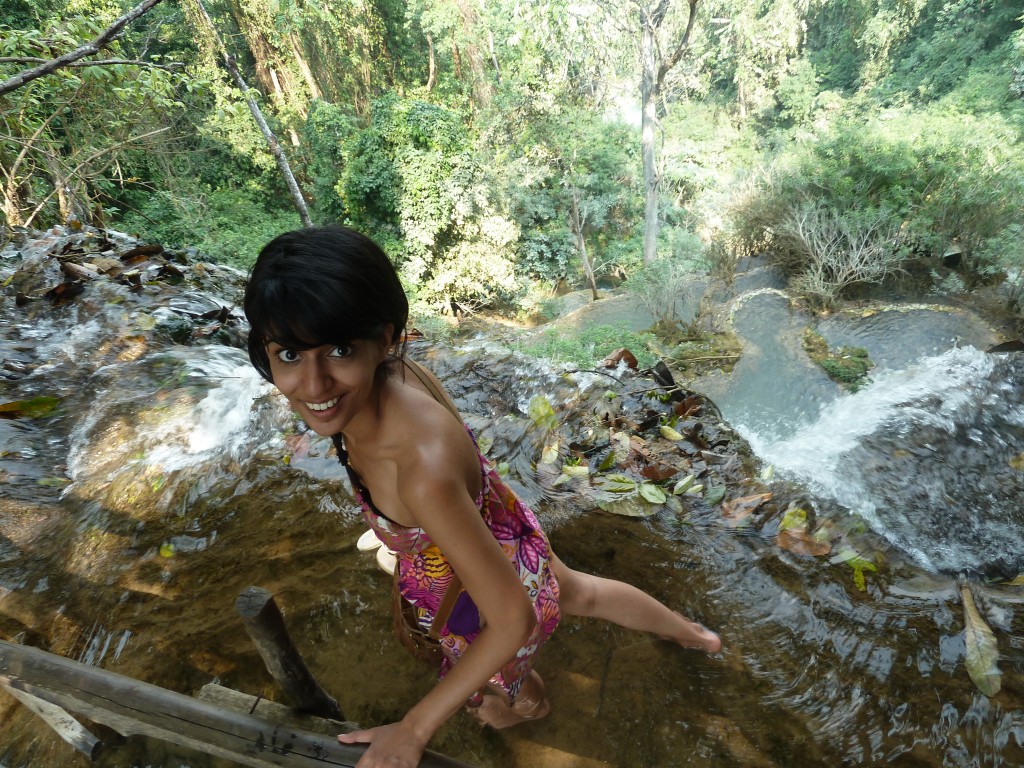 (It was kind of steep!!) I became Jane from the Jungle.. I even had my safari print bikini on… I flung myself using a rope into the waterfall lake… I think the other spectators worked out that I was scared, as I collated a queue of people behind me waiting to do the same thing and when I finally jumped in, everyone cheered for me! … Woooh! 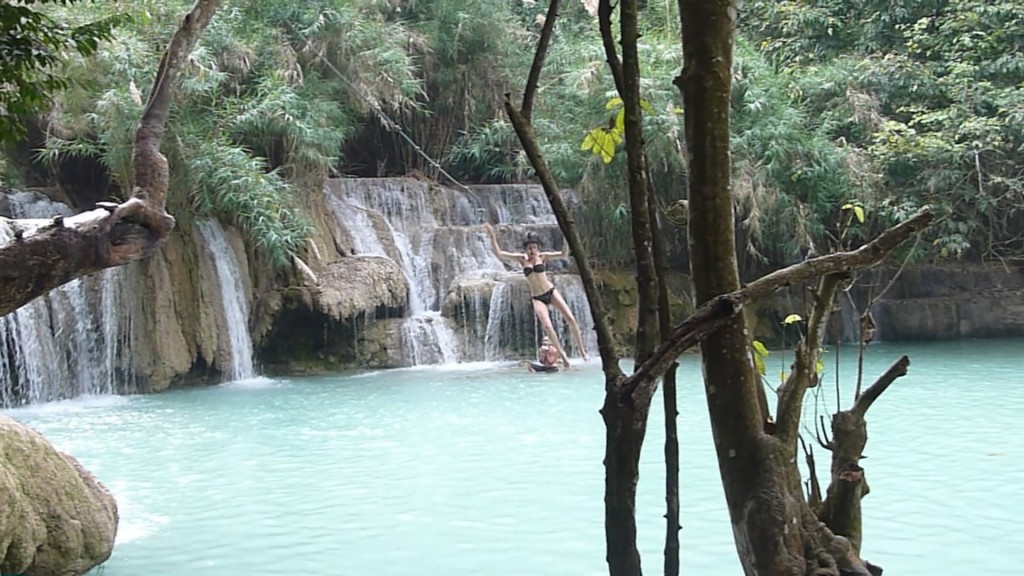 I must mention the night market here too, firstly because its surprisingly a pretty market with the usual handicrafts, notebooks , jewellery etc but more so because we visited it EVERY night we were in Luang Prabang… Rishi bought some of those big travelling people trousers and actually looks good in them while I bought a random chunky silver chain… Well I had to get something and I’d already bought another pair of short shorts in VV, there’s only so many of those I could get!! (Sure the girls will disagree with this).. 😉

This part of the trip, we really started to get into traveller mode.. We even gave up our nice Phousi guesthouse for our last night in Luang Prabang to stay in one of the cheap guesthouses without A/C!!! I knooooow!! Am only kidding, it really wasn’t bad at all…but, we had been spoilt while in Laos cos it’s super cheap here. 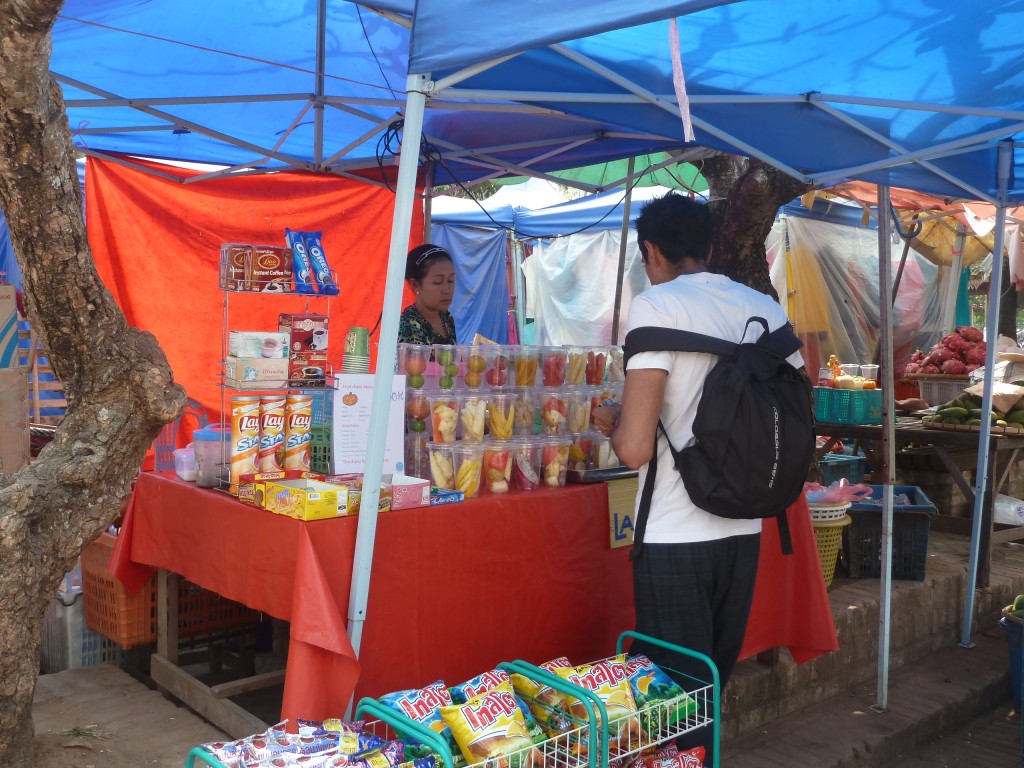 Being in Laos and meeting some really cool people over the past few weeks, we’ve really started to enjoy the trip… Letting ourselves really get into the activities and sights and also permitting ourselves to just STOP, relax and soak it all in… Crazy talk from a city girl ei?

I’ve read 800 pages of Shantaram in the last month, and also decided with Rishi to go on loads more of these trips… Hope we remember this when we get back! 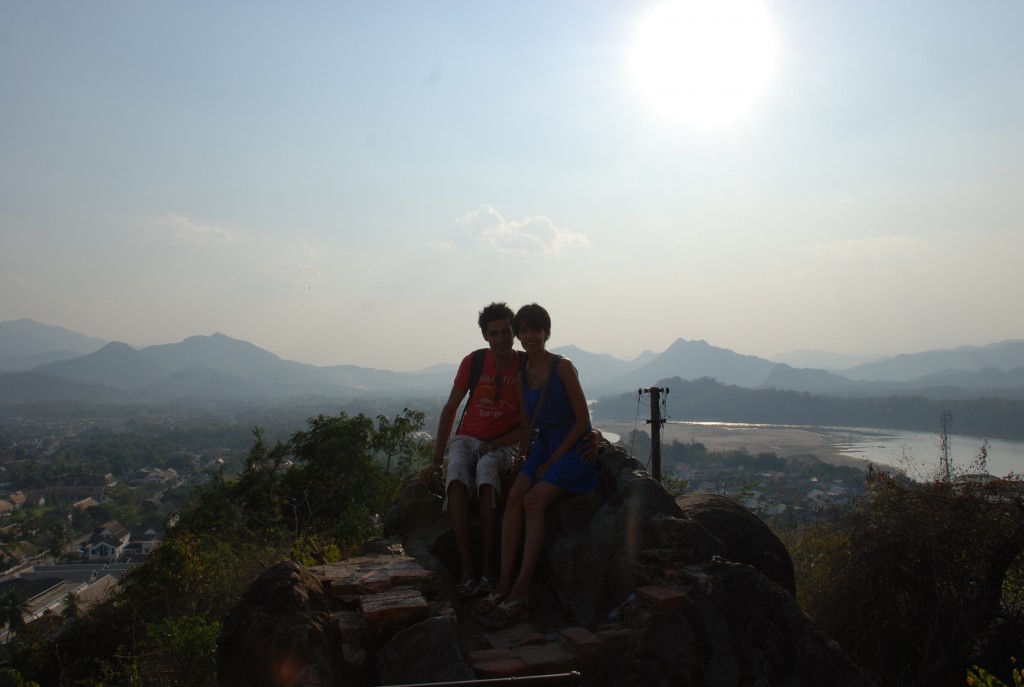 Missing everyone back home. Not that you’ll recognise us…Over-indulgence of food and sunshine means that day by day we are getting darker and fatter… O well!!

Till next time… x