Sadly we had to leave the sunny and hot East Coast to head over to Melbourne… Yes that’s right, we didn’t go to Byron Bay (and for those who don’t know what Byron bay is – its a beach location in New South Wales which most people love for the chilled vibe and partying) but the Blues festival goers had bagged all the accommodation months in advance! Booo..

Anyways, back to Melbourne, our first day was a Sunday on Easter weekend which meant loads of shops were shut. Thank God! … But, we were right by Queen Victoria market which is kind of famous in that neck of the woods so we kicked off the day with Rishi’s favourite activity, visiting markets. He did keep me quiet though as we wandered each part of the market, aisle by aisle by stuffing us with some $1 donuts that were piping hot. Yuuummy! Can’t really complain if you’re munching on those. 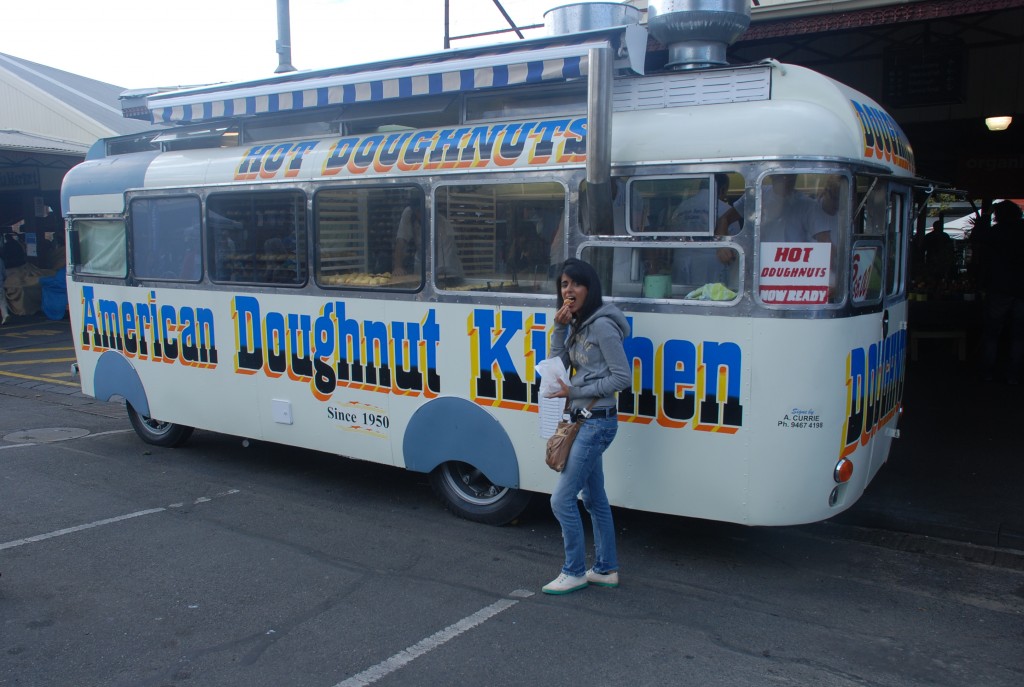 Having been suitably sugared up, we very naughtily rode the trams into the city center without paying!!! Sounds really bad BUT to our defence, the stupid machines only take coins, so it wasn’t really our fault!

Starting to enjoy getting stuff for free, we took advantage of the free information service in Melbourne (which is reaaally good), to work out how best to capture the sights of this city everyone raves on about! The answer is walk around it, venture to the left, or the right, go down the river or up.. Just explore. And we did. It really is a lovely city with fabulous buildings, funky alley ways and an awesome skyline view at night. We can see why people like the vibe there.

We did really want to check out the bars in Melbourne but that evening we had booked to see Will Anderson as it was the Melbourne comedy festival.. He is really funny, gruesome at times but hey isn’t that what you want from a comedian? .. Boosted by this, we had a slap up meal at… Wagamamas!! Whooo and booked another show with a dude called Reginald who is supposed to be pretty ‘blue’. Totally excited for this hard hitting comedy but were sadly let down. He was sooo crap, never really made a full on joke, seemed like he was just making it up (poorly) as he went along yet the aussie element of the audience were in hysterics! Go figure?! 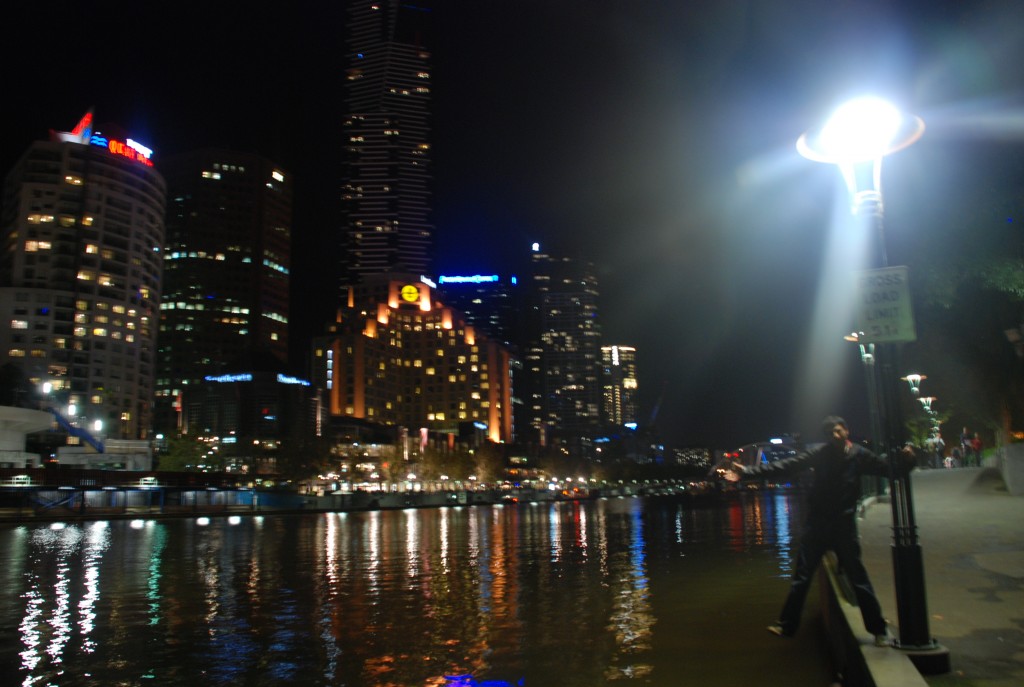 We hired a car the next day to see this famous Great Ocean Road.. Initially we were actually kind of disappointed, it sooo did not compare to Route 1 on West coast of US. Then we saw the big sights, the 12 Apostles (major tourist numbers), Loch and Gorge, London Bridge and one of our favourites the Bay of Martyrs. 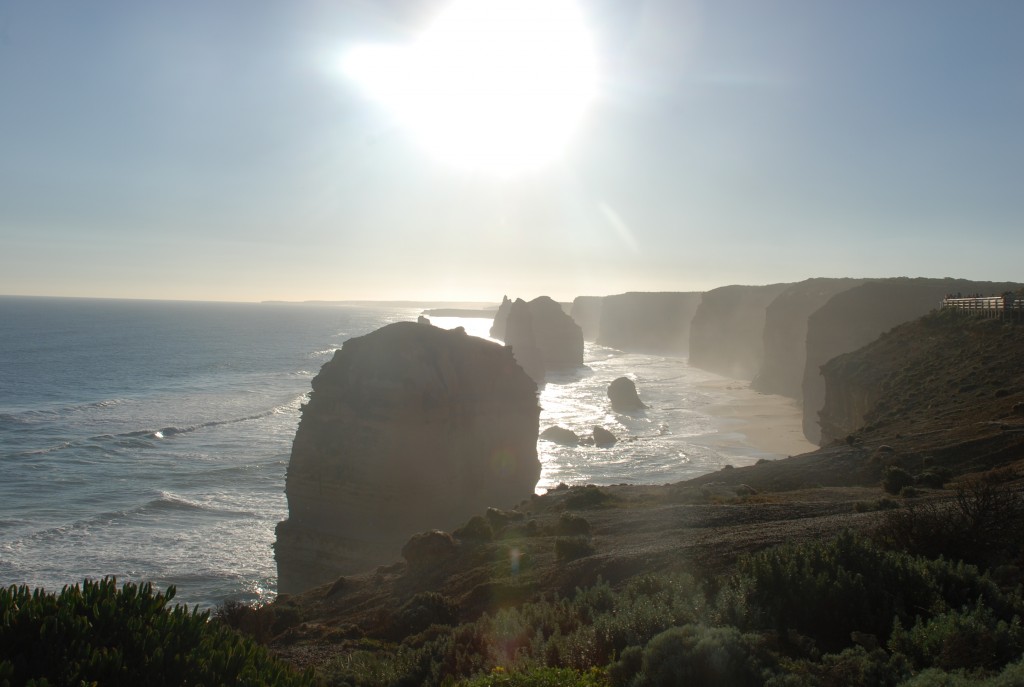 It’s such a spectacular scene to see the masses of rock which were once all part of the mainland be out there in the sea in different shapes and sizes all because of the power of the water. It was nice driving round in a car too, like having our own space and freedom again.. Hmm, although I guess travelling round for 4 months is pretty free too?! Lol 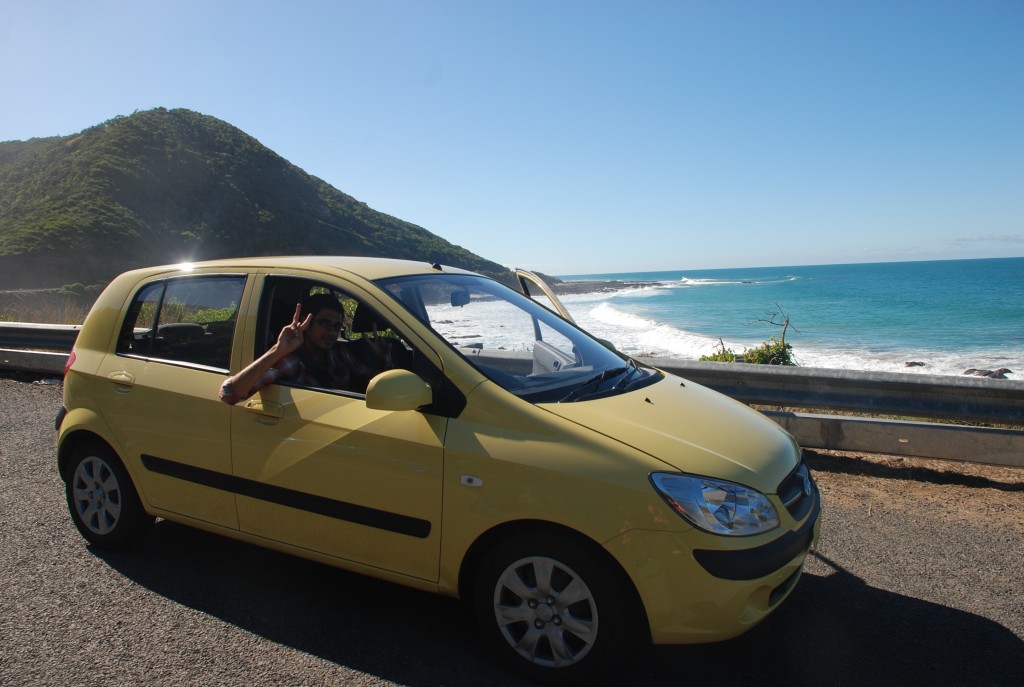 The last day we went to St Kilda, the local beach to see what the fuss was all about. We found a spot at the end of their pier looking out onto the water and boats while basking in the sunshine and reading our books. But the day was not to be so. None of that reading was to happen because it was like going to a mini wildlife show. After watching people feed the ducks, while seagulls tried to steal their food! I know, how mean?! We noticed a couple of penguins hiding away in the rocks behind where we sat! Sooo close and yet so hidden. I was really excited and we took a gazillion photos of different parts of the penguins that could be seen when they peaked out of the rocks. 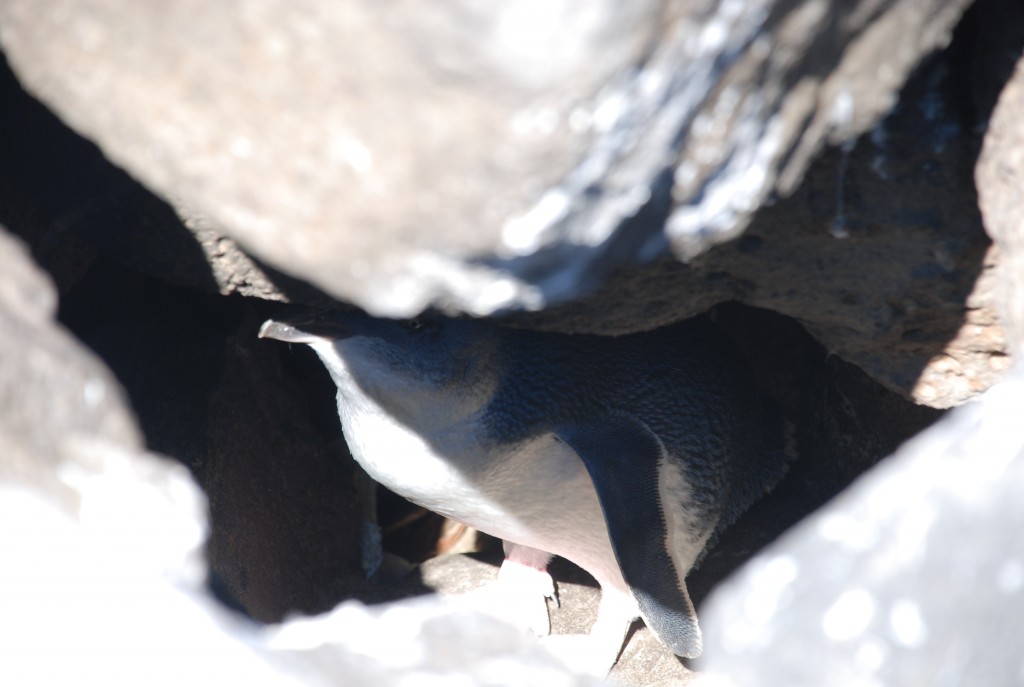 It totally made my day and I finally got myself to sit back down next to Rish and read… But nooo, it was not to be so. Dolphins swam up super close to the shore and were doing mini in out and jumps in the water. One of the old men who obviously had been sitting out in the sun too long swam in to ‘play’ with the dolphins.. I think he scared them away instead.. But who cares? We saw dolphins, right up close!! Whoo again… 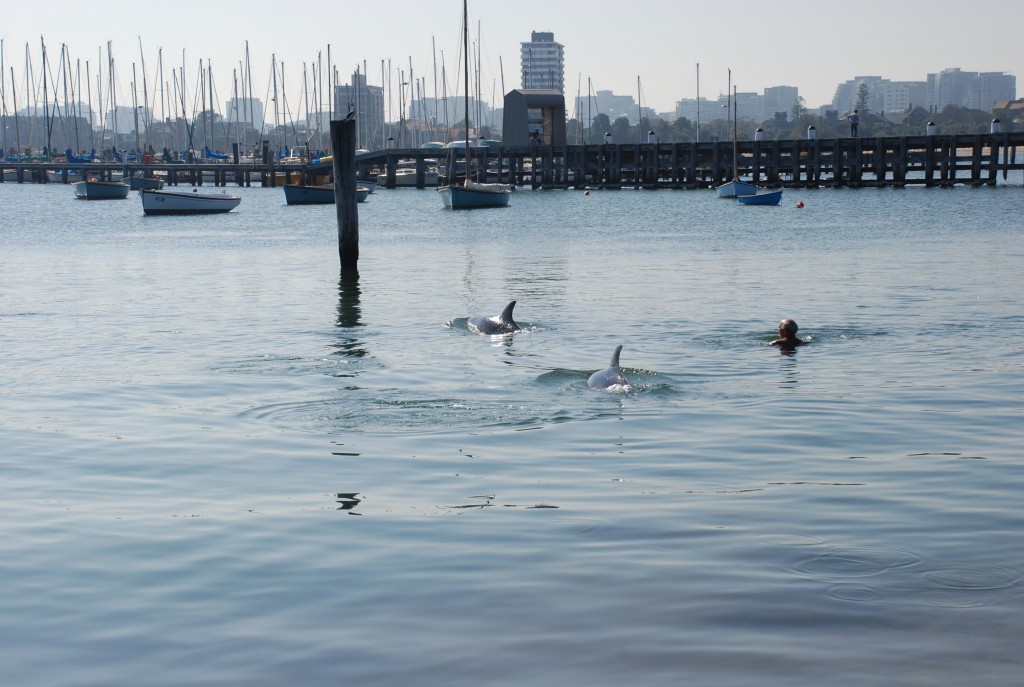 Rish, the big animal lover was overjoyed with our adventure but I became slightly obsessed and wandered back and forth looking for mooore!!! Ooh, actually we saw lots of starfish too but that didn’t quench the thirst to see big hard to find animals!

Unfortunately we were flying to Sydney that evening so had to leave St Kilda’s but did manage to have a lovely lunch in the town centre. It’s such a buzzing place. It has loads of alfresco restaurants and tom, jane and even their cat were out (..translation: There were loadsa people)! Could totally imagine going there on weekends to chill and hang out… 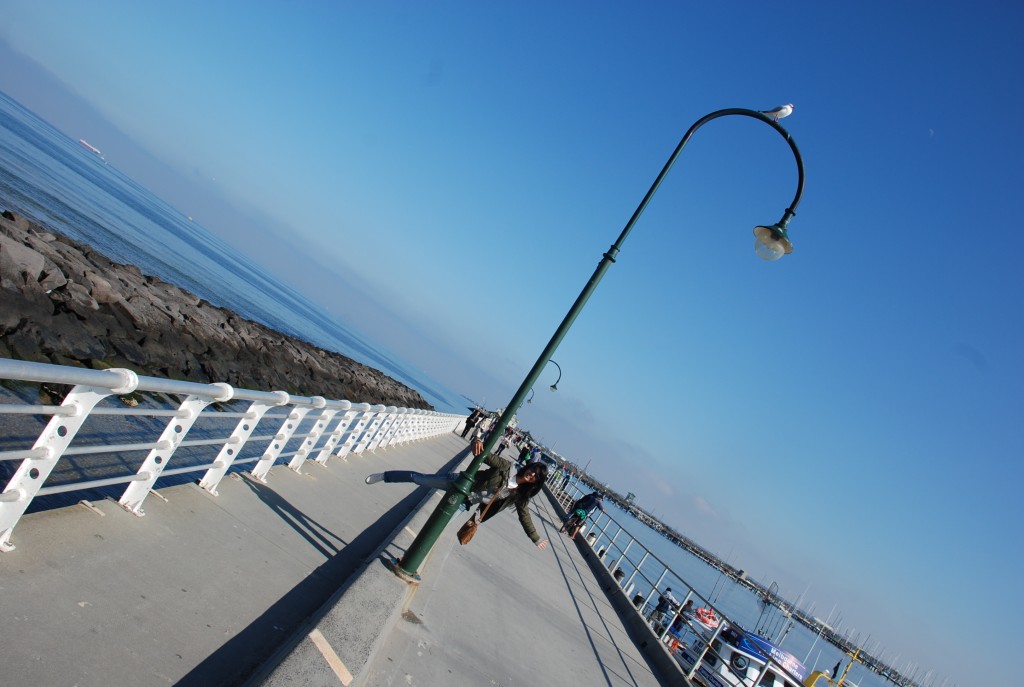 Let’s hope Sydney can top this!

…Loose your luggage, its your birthday!

Okay okay, so we’re in Singapore, Anj had lovingly spoilt me and organized this part of the trip all for me! 🙂

But after our flight over night, with 8 hour stop over, and after the usual couple of donuts, we waltzed down to the luggage area to find our bags missing!

After all these questions ran through my mind…we complained and received 80 quid to survive on for the day!

So off we went to Little India where we took a nice walk around and visited an amazing temple. It had incredible statues and carvings throughout, and we even found a poster advertising a talk taking place by Swamiji (Chinmaya Mission)! Small world! 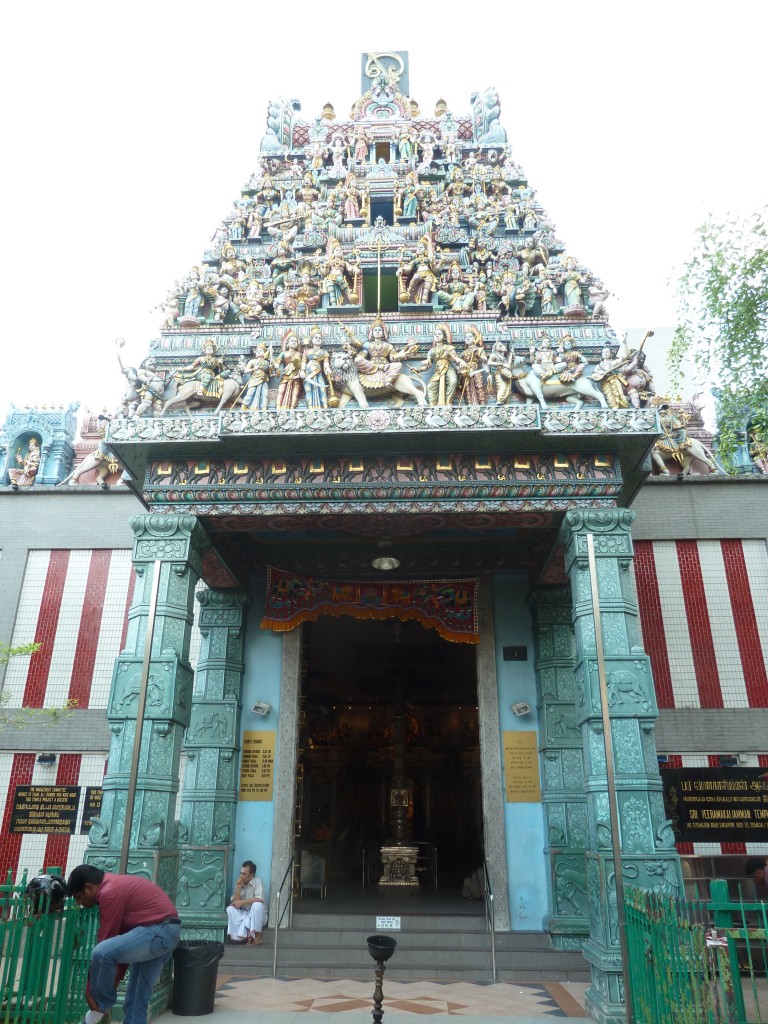 We then trekked back to our hostel, hoping to discover our bags were back! And guess what they were! Shweeeeet!

So in other words we got paid 80 quid for our luggage to be delivered to our hostel! This was especially sweet since our hostel was on a steep hill, so we avoided the climb with our heavy backpacks!

Anywho, after getting ready and a wonderful meal at an italian restaurant, Anjali took me to this amazing bar right on the top of one of the tallest buildings in Singapore! 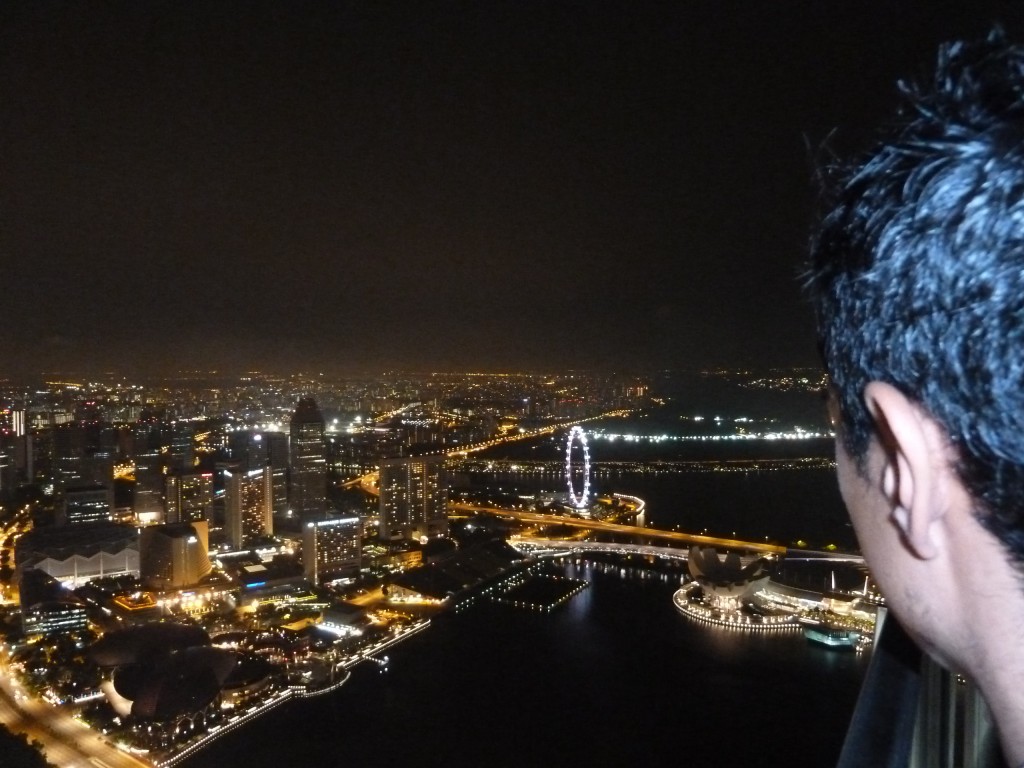 The views were spectacular, especially at night and we were there till 1 to celebrate my birthday (whoop whoop, I’m now 29). Really special place! Being the partay animals we are though (not), we headed off to the Clarke Quay clubs! Was buzzing with people and all in high spirits! Was a special night!

The next day (my birthday), we received a sudden phonecall from Kish! I couldn’t believe it! Kishan and Meera are ENGAGED! Soooo exciting! And an amazing proposal, which I’ll leave for them to tell the story! CONGRATS guys! (Even though Meera, you know Kish will still always be mine…especially when Brian Mcknights on!)

We then visited Orchard Road to roam the malls. This street is jampacked with shopping center after shopping center! Was a load of window shopping for me and Anj though (especially after the amount we spent in Japan) but it was amazing to see how multicultural Singapore is and how safe it feels to walk around! 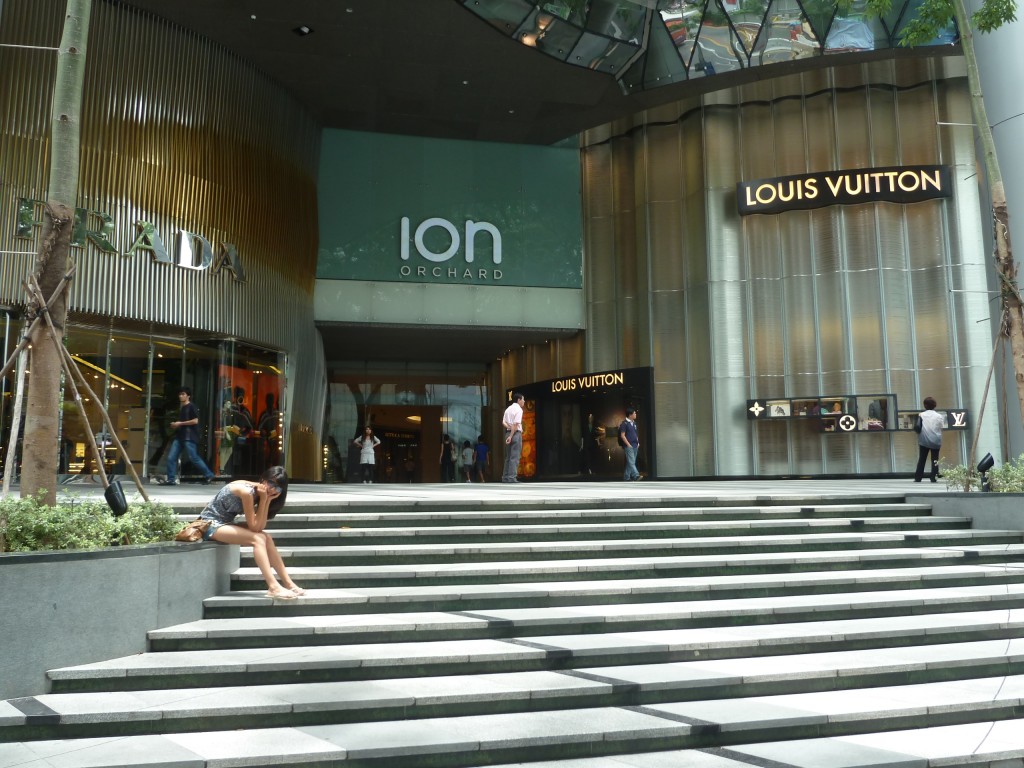 Finally we taxied (with a guy who quite obviously was a tour guide in his previous life) all the way to Singapore Zoo! This is a MUST see in Singapore! The animals are not behind cages but actually out in front of you! It was like visiting a wildlife safari, but where you kinda knew you were safe! Amazing experience, filled with monkies, snakes, lions, giraffes, kangaroos, birds, elephants and much much more! 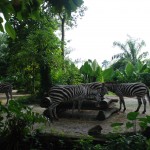 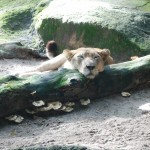 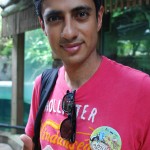 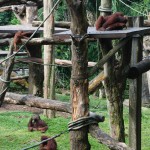 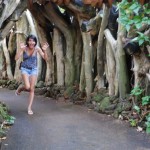 That finished just in time for us to speed back to little india for dosas, start following the world cup cricket final on our mobile phone and get ready to take our flight to Australia!

The worst thing was we actually got on the plane to travel to Australia just after India started their innings and lost there first 2 wickets! 31-2…crazy!

All I could do was sit there wondering! Did India do it? Are they gonna end their 28 year wait? Will Sachin get his hands on the trophy before he retires?

We landed to find they won! And on top of that Man Utd won, Arsenal drew! I literally wanted to jump up and down on the plane, as I waited to get off! I seriously had to restrain myself!

Overall my 29th Birthday was unforgettable! In one day my best mate got engaged, India won the world cup, Man utd extended their lead at the top, and Anjali spoilt me rotten! Thanks Anj for a wonderful day! (P.S. thanks to all those who sent me their birthday wishes too, I’m lucky to have you all!)