“Get the motor running, ta da ta da, running on the high way… (okay god knows the rest, so I’m gonna skip to the chorus )…Born to be willlllldddddd!”

Well before we get given the title of old foggies, it was time for some serious adventure…

It started with our first ever sleeper bus to Hoi An. Now a lot has been written about how uncomfortable these buses are, especially for tall people like me…but to be honest they aren’t that bad…okay they’re not 5 star, and agreed, you may get whiplash as you’re thrown up and down off the bed as the bus speeds over bumps…but you’re asleep for most of the journey…so another tick off the daring list for me and Anj! 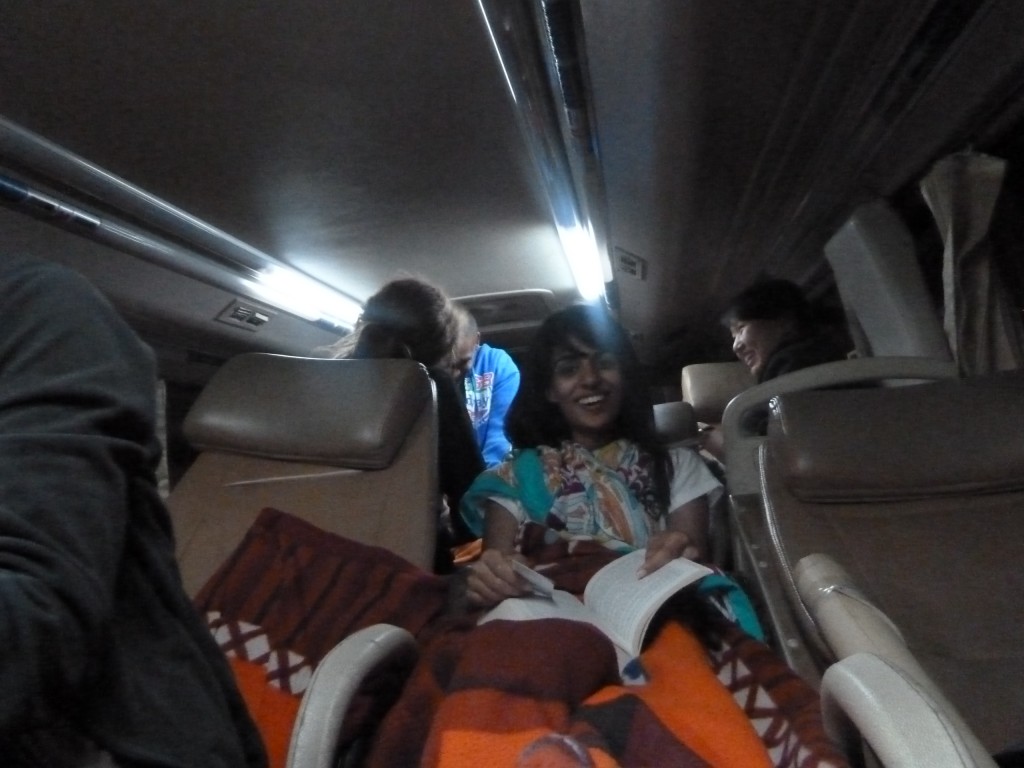 Hoi An, if you don’t know is the clothes making capital of Vietnam, where you can get shoes, boots, suits, dresses…in fact even if you wanted a gorilla outfit they probably would have made that too…

However as cheap as it’s meant to be, its not really! Well for men’s suits anyway. In London, you can now get a tailor-made suit for under 100 quid, while Hoi An prices were around 50-70 and the material was not necessarily what they said it was. Hmm. Plus, with the reviews we had read about fitting, we decided it was better to stick to London where we can return it if it isn’t right!

After seeing the small number of sights and the main town (which only took half a day), have to say it truly is a beautiful, quaint little place. Absolutely loved the atmosphere. 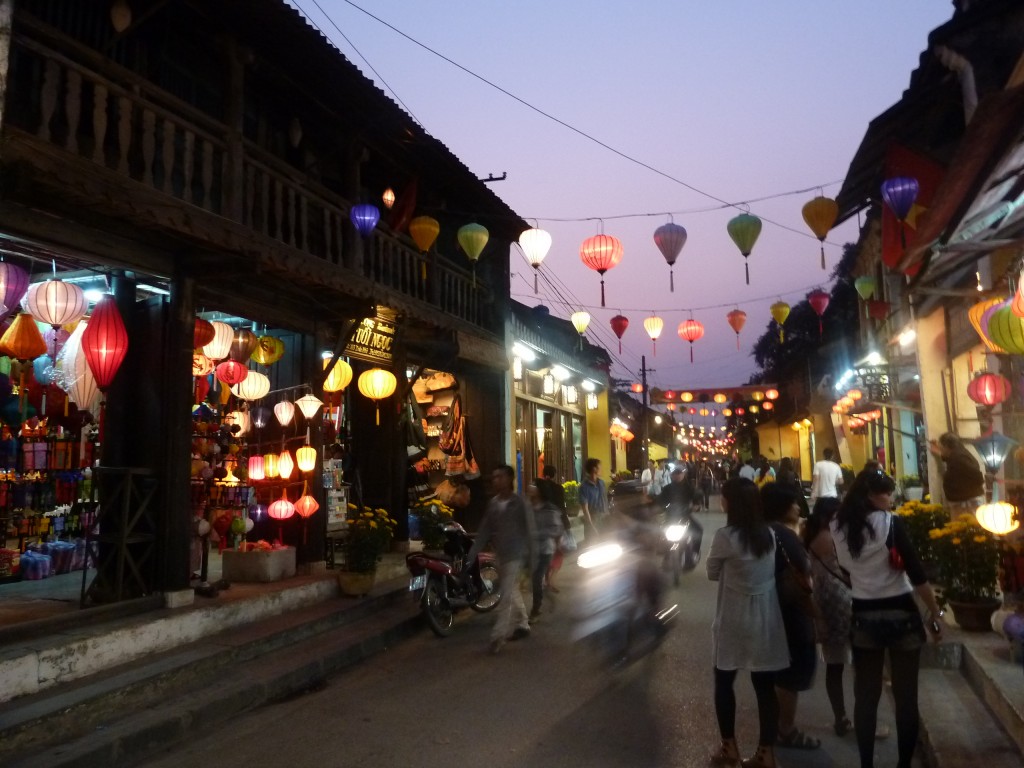 Okay doesn’t sound too adventurous so far, I admit, but here’s where it gets fun…

During our bus journey to Hoi An, two girls we met from Germany told us about some wacky “easy rider trip” they took and told us we should take it too…

Now let me explain what easy rider is, and this will also explain my little intro song (as i sing it to myself again!)…

Easy rider is where you jump on the back of one of those random biker dude’s Harleys (okay…Honda) and they take you out on the open road..

You commit to staying in a random hostel chosen by them (god knows how bad that would be), eat where they eat (remember we’re veggies), do what they do, go where they go and literally give these strangers your lives in their hands…as they speed around remote places with you holding on to them for dear life… 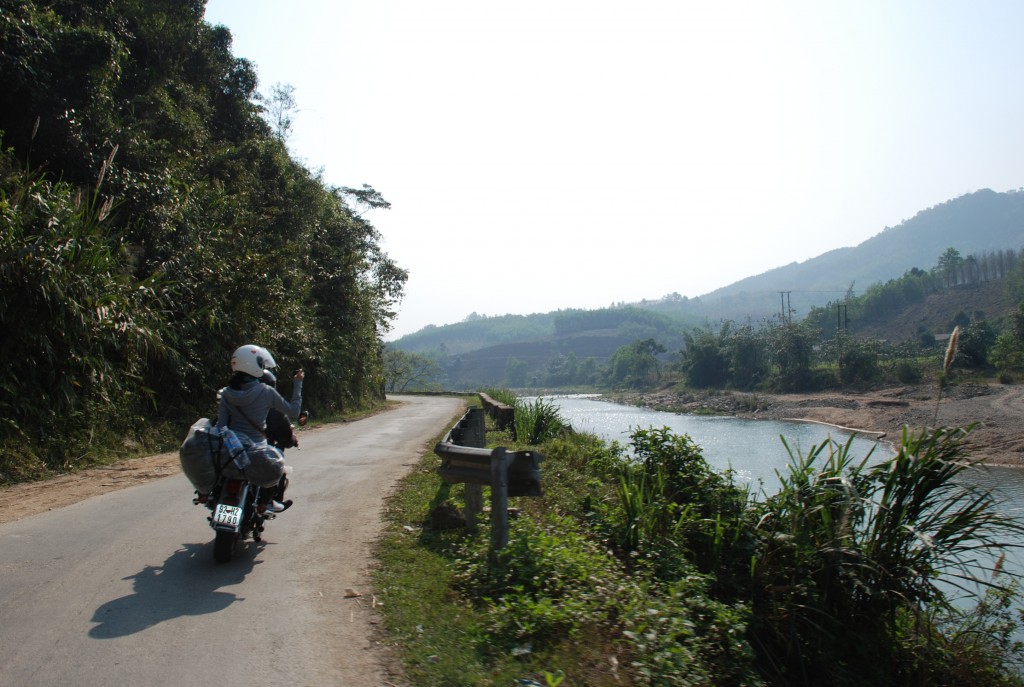 …Well guess what we decided to do? Yep we booked it and not only for one measly day, but 2 days and 1 night… They would take us from Hoi An to Hue (another massive city in vietnam)…But instead of the normal, safe, city roads, they would take us through the mountains and villages so that we could see Vietnam in a completely different light (via the Ho Chi Minn trail)!

Those 2 days were the best part of Vietnam so far, without a doubt. Apart from just the pure adrenalin rush (and butt pains) you get from sitting on those bikes (head out of gutter again people…come on! :)); the views were spectacular and the things we experienced amazing.

We had the opportunity to see some breathtaking temples (including the hindu “My Son” temples), a few surrounded by beautiful serene lakes and wonderful forestry, that included pineapple trees, and other plants which close just from your touch. 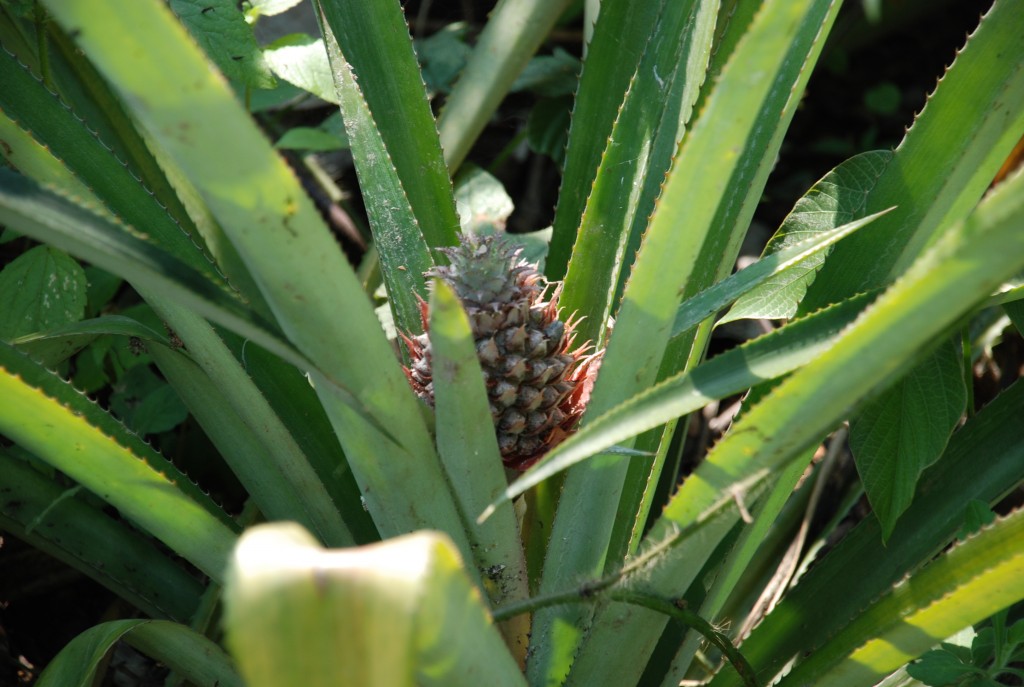 We also crossed a lake on a motorbike ferry, met a cute family who make fresh rice paper like crepes….(mmm boy was that tasty), ate real cinnamon leaves, saw waterfalls, met 2 snakes and stopped at boiling hot water springs which are used by the locals to drink, shower and just have pure fun messing around in! Absolutely zero tourists, just real Vietnam life! 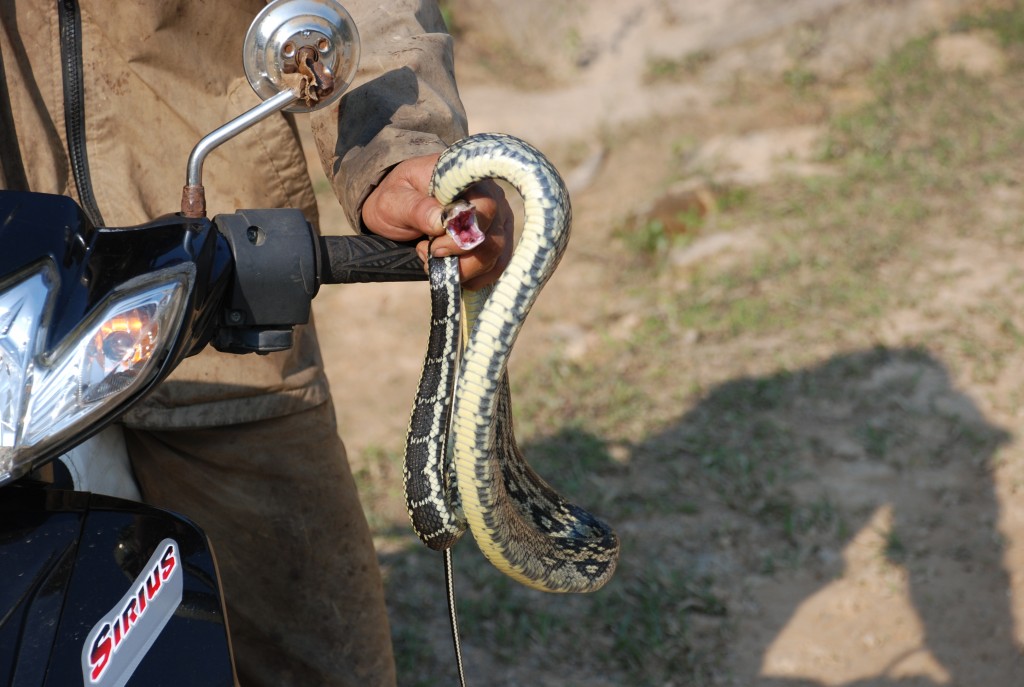 In fact, we also went to one village where the spice girls wouldn’t be too popular. In this village, after the men get married its apparently tradition that they do nothing but chill… the wife works and brings in the money, cooks, cleans, raises the children and does everything… so I did what every caring husband would do..I asked Anj if she wanted to move there… Don’t think I can repeat what she said here 🙂 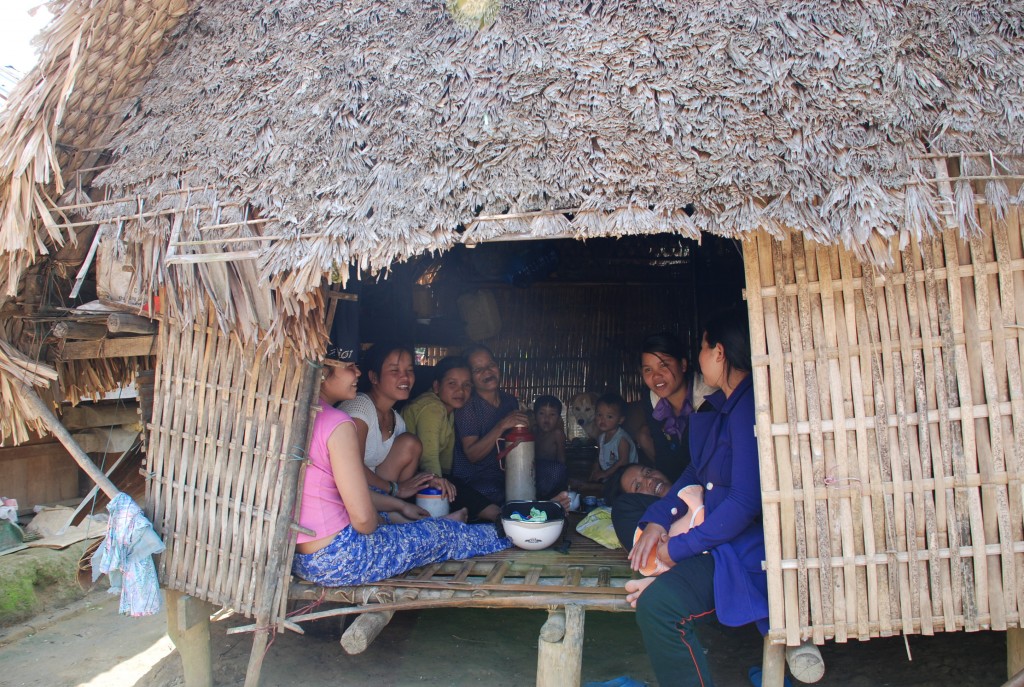 …And how about the food…well it was proper street food, surprisingly tasty and didn’t make us ill…

Another surprise was the guest house, it was a lot cleaner then we expected too! What a relief, can’t imagine how Princess Sparkle would have dealt with it otherwise… Actually let me rephrase that, what she would have made me do otherwise! 🙂 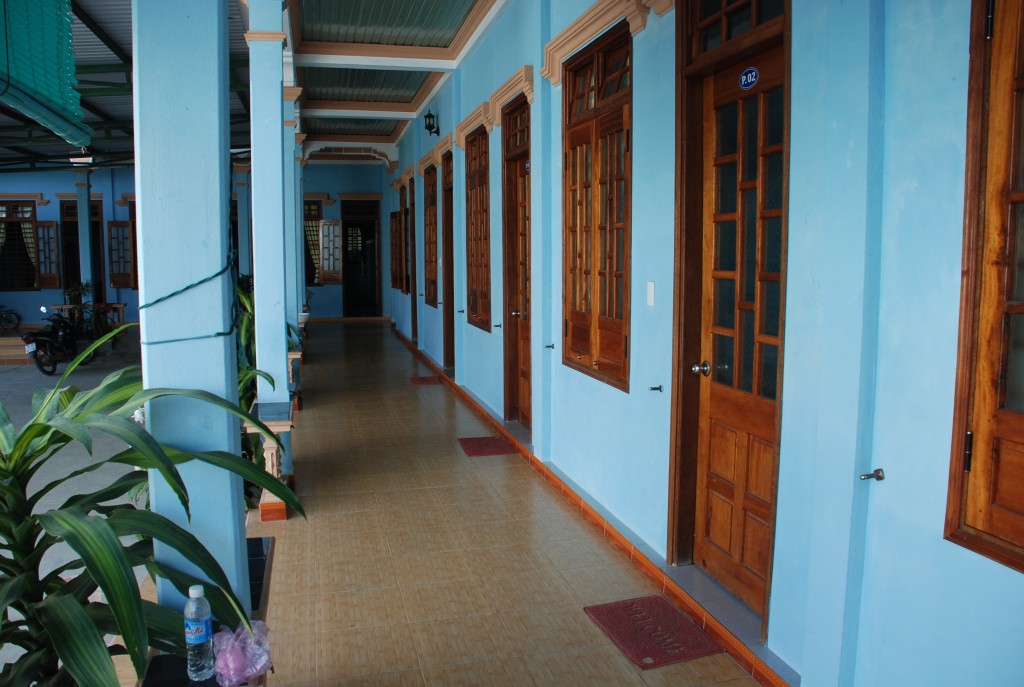 But in all seriousness, one of the key things that truly hit us was the difference in the people we met… 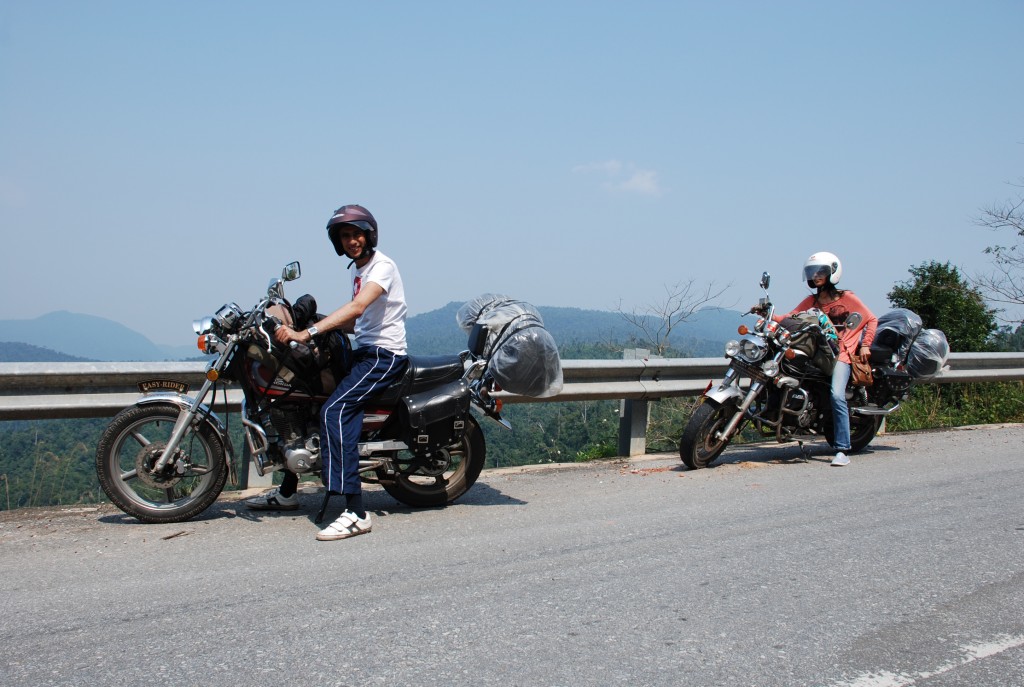 Everywhere outside the city, people welcomed us with open arms, expected no money and even waved at us with a smile when we zoomed past. Stark contrast to many of the city people we had come across!

And getting to know our easy riders; Uncle 9 and Mr Trong was great. They were loads of fun, and they gave us some insight into really how people live in Vietnam, what they think and believe in. Was great! 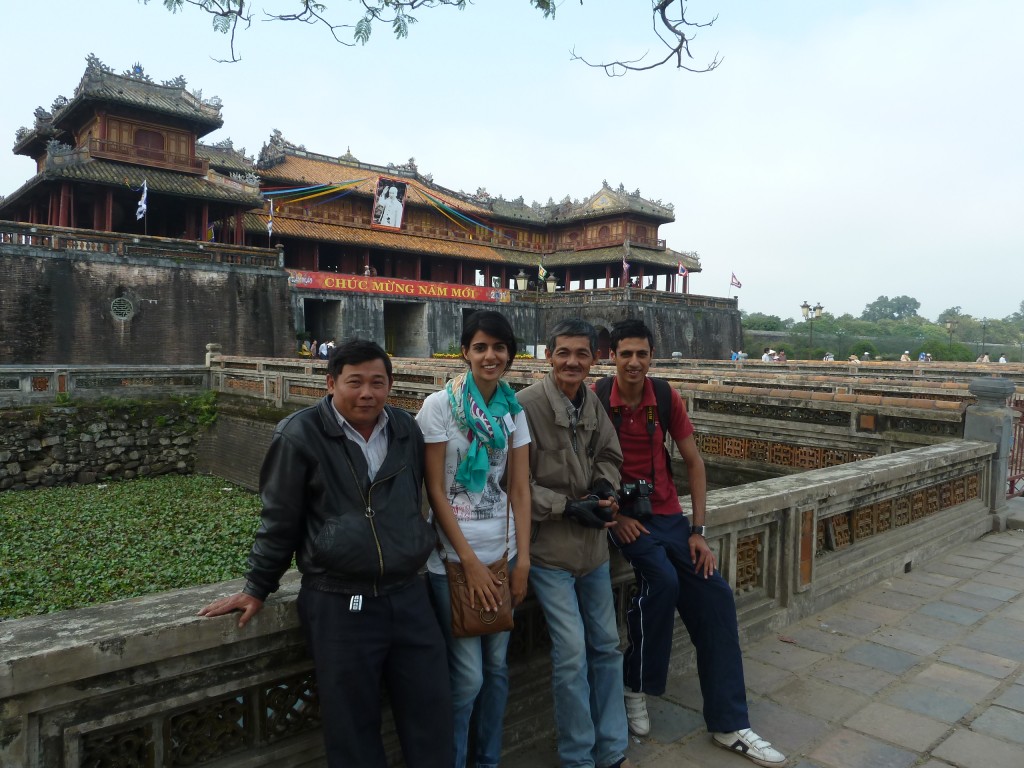 If I could make one suggestion in vietnam…do Easy Rider, but make sure the drivers have a valid easy rider id!

(For those that want to know, here’s the people we used:

Our easy rider trip ended in Hue, where they showed us some stunning pagodas and the massive citadel.

Here one tourist from China decided to run at me and hand me their baby and asked if they could take a picture! RANDOM (even though for some reason i did kinda feel chuffed :)).

Well after our previous few days adventures, Hue has provided a day of rest…especially before we hit the next sleeper bus to, the capital of vietnam, Hanoi in a couple of hours! Can’t wait…NOT!