Welcome to the Iguaza falls.

Taller than Niagara Falls, twice as wide with 275 cascades spread in a horsehoe shape over nearly two miles of the Iguazu River, Iguazú Falls are the result of a volcanic eruption which left yet another large crack in the earth. Just like Niagra falls the falls are split across two countries; in this case Brazil and Argentina…. These facts however do nothing to describe the grandeur of these gorgeous falls. 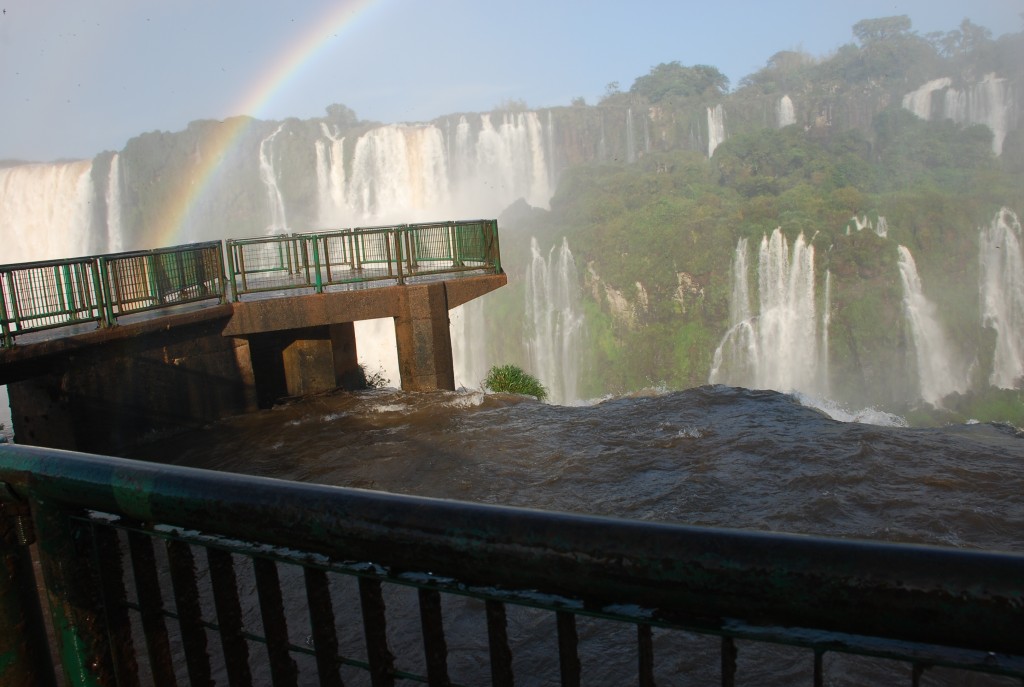 The best thing about Iguazza falls is at every corner there is an even more spectacular view.

There are trips which take you on to the Argentinan side too where there are treks around to see the falls from different angles. The most fantastic thing about the Argentinian side was the number of opportunities there are to get up close and REALLY personal to the falls. You can almost touch the gallons of water that are thundering down.

The really cool part of the falls is all the activites you can do. We took a 8km trek, cycle and canoe ride around the luscious green woodlands surrounding the area. Then there is rapelling, which is where you climb down a rope with the views of the waterfall behind you….. Despite my fear of heights, I couldnt say no, although the pictures perhaps give away my fear! 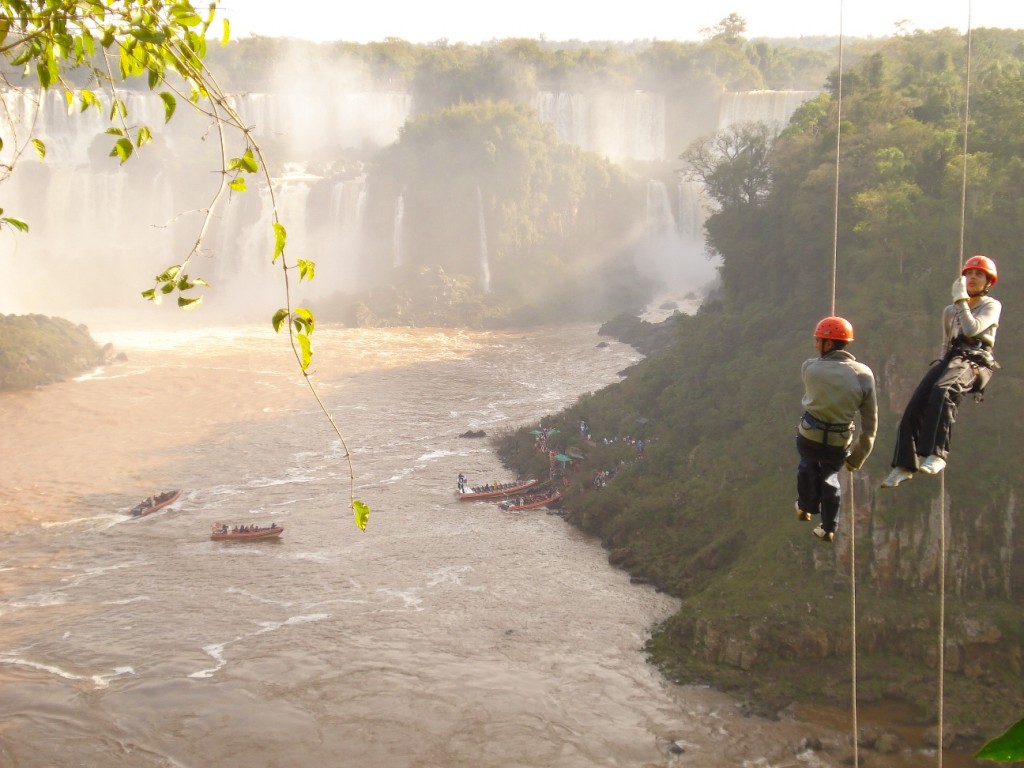 When you get to the bottom, you walk over the rocks and go white water rafting. Unfortunately the rapids weren’t so rapid, but the kind speed boat drivers (see below) would whizz the speed boats around us creating a bit of turbulence for us to fight against… and ofcourse if all else fails, you just jump in!!! EEEK!!! SO COLD, but SO MUCH FUN!

One of the coolest parts of the Iguaza falls activities has to be taking the speed boat trips though. You can go from the Brazilian or Argentinian side. The speeed boats literally drive headfirst into a part of the waterfalls. Hold on tight. Absolutely soaked and totally exhilerated. Could there be any better way to admire the waterfalls than from beneath it?! 🙂

And if all of that is not enough. We also took a helicopter ride over the falls and went to a bird sanctuary….. well hey, you got to make the most of the place right?

Iguazza falls totally rocked…… it has got to be a must see on your list!

So our adventures began at around 4am on 20th July 2008. Yes that is just 2-3 hours after the end of our wedding reception. Obviously when planning our honeymoon, we hadn’t quite considered how tired we would be after 2 weeks of wedding events and parties! Nevertheless, we had booked a 6am flight to… well I didn’t know where we were going! It was a surprise! Try packing for one of those!

Picture it now, Rishi and I absolutely shattered but excited for our trip, Rishi’s parents, and my parents, still wearing the outfits from the wedding reception all sleeping on our own laps in my Dad’s 7 seater car in the carpark at Heathrow! Our 6am flight had been cancelled so we were waiting for the 11am one, which would be fine had we had any more than 5 hours sleep in the last 48 hours.

It was all worth it though, a few hours later and we were en route to Rio for our South American adventure.

I’d always wanted to go to Rio…… beach, carnival, football, the favelas, City of God but most importantly…….the havianas! Uh ye, those are the best flip flops ever!!!!

But seriously, Rio as a city was cool, a must see once!

One of the most fascinating parts was the Favelas – i.e. the ghetto of Brazil which sits right opposite the apartments of the rich and super rich. It’s just crazy walking round while the tour guide, who lives in the favelas explains to you that everything in the favelas is run by gangs, from the electricity to the transportation. A definite eye opener! But make sure you keep your eyes on the road, you don’t want to be locking eyes with anyone there!

Then there was the footy match… only one word to describe it! Electric! We went to watch a normal league match but still the atmosphere was extraordinary. Fire works in the stands, humongous banners, singing, chanting, 6 goals and some pretty slick football. It was awesome. If you go to Brazil you have to check out the football…..

Now I can’t talk about Rio without mentioning the hand gliding. My darling husband decided to book hand-gliding for us from a cliff over the beach in Brazil. Sounds spectacular right. Well not if your scared of heights, but I was not one to turn down a challenge….. off to the top of the cliff.. hmm, lets have a quick peak over the edge…. AAAAAAAAAAHHHHH, No way in hell am I jumping off a cliff attached to a Brazilian man I’ve just met and some wings made out of kite material! But ofcourse, Rishi being the adrenalin junkie couldn’t wait and off he jumps… check out the photos!